Jurassic World Evolution developed by the same company as Planet Coaster is a park management and simulation game. At first glance it gives off a similar vibe to Zoo Tycoon and Cities Skyline. The graphics are beautiful and realistic for the dinosaurs. The animation on the dinosaurs is fluid and has a great feel to it. At first glance the game has a lot to offer—power management, fossil expeditions and research, genetic modifications, build options (fences/gates/guest buildings).

My expectations were disappointed when I realized the options given to you in the first hour of the game are everything the game has to offer. The game offers little depth to the gameplay. They glossed over a lot of features that would otherwise be a lot of fun. The game feels like an incredibly well optimized alpha launch. The game runs beautifully and I experienced little-to-no lag. The game apparently runs decently well on older machines as well (but I only heard this verbatim from another reviewer).

Despite being launched this month the game already offers DLC for $10.99  (I got the deluxe version—so the DLC was effectively 50% off). The DLC offers a few measly dinosaur skins:  Styracosaurus, Crichtonsaurus, Majungasaurus, Archaeornithomimus, Suchomimus. 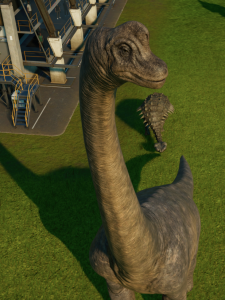 However, after about 5-6 hours I felt like I exhausted a lot of the new options. They offer a lot of variation in the types of dinosaur fossils you can bring back and this is exciting if you have a favorite dinosaur you’d like to bring back. I was excited about the Parasaurolophus. In the Land Before Time the character Ducky was a Saurolophus, closely related in appearance to the Parasaulophus. I realized after a few hours of going to dig sites and unearthing fossils the game was built wide – the difference in the dinosaurs was merely cosmetic (divided into 4 categories: small/large herbivores, small/large carnivours). 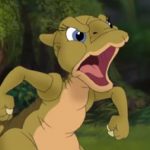 Getting all the fossils began to feel more like collecting all the different “skins” for the animals rather than an exciting unearthing of mother-fucking-dinosaurs.

The genetic modification also felt lacking for me—maybe I wasn’t paying enough attention but it seemed like the modifications didn’t do much to alter the dinosaurs in a way that affected the gameplay. I tended to not opt for a chaotic style or getting my dinosaurs to fight so it wasn’t noticeable for my gameplay preferences.  The biggest visible modification was the colours and the options were very few and didn’t seem to have many more to unlock. 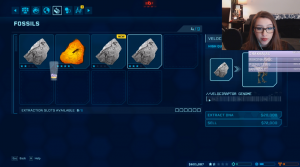 I found myself clicking on buildings hoping for more in-depth options and customization. I’d click on “Fast Food” shop and hope to tweak the options but the depth ended at which sale option you’d like to offer “dino bites” “dino feast”, how much you’d like to sell it for and how many staff on hand (which is really just how many people can enter a store at any time).

The eating habits for the animals were divided only into 4 variations (ground herbivore feeder, tall herbivore feeder, meat-on-a-platter, and live-meat).  As lover of city-building, simulation, management/tycoon games this felt incredibly lacking. I want to be able to offer variation in my dinosaur pens. I’d would have loved to see dinosaur toys or variations in diet for the dinosaurs. The same goat is used every time for the carnivores—even just throwing chickens or other animals would have been fun.

I love decorating and creating designs in the game but the game didn’t offer many options for aesthetics. I was hoping for individual trees, flowers, rocks, benches, trashcans, etc. to place around and give some individuality to the park.

Contracts in the game are akin to small quests– “Maintain zero power outages for 10 minutes”, “take a photograph of a brachiosaurus”, “Build a ranger station.”

The quests are fun but they don’t offer big enough payouts in comparison for how much it will cost the player to complete the contract.
A contract asked me to sell 2 Ceratosaurus which would cost me more than 1.6million to hatch for a measly 150k payment. Another one wanted two dinosaur fights and only a payout of 100k for two dinosaur deaths (it would cost more money to create two dinosaurs that are aggressive towards each other to create a fight since there is no way to provoke the dinosaurs otherwise.)

The game takes you through a series of islands referencing the movies in an updated look matching the rebooted franchise appearance. Each island offers a small campaign in increasing difficulty. I enjoyed the idea of having a story in a simulation/park management game. I hope in the future more management games offer a canon story line with a few campaigns following that story line. Typically narrative within simulation games is next to none or it contains a few disconnected story lines meant to promote game play variation rather than an over-arching story. I thought that was unique and gave some personality to the game.

I liked having a few different personalities for the various contractors (science, entertainment and security) as it offered a variation in dialogue.

A few hours into the campaign it dawned on me there is no Sandbox mode. In order to reach the sandbox mode, you are required to unlock all the islands to reach Isla Nublar (the original island the Jurassic series took place.) On the sandbox island the player is offered more control of daytime, weather, power and dinosaur chaos.

The guests in the park don’t have any emotions. They don’t have wants or needs. There isn’t even an option to see how they feel about the park.

I’d have love to see a happy/upset need range. For example, if a dinosaur gets out it could affect ticket sales or if the emergency shelter isn’t opened up guests could get mad about being stuck inside. Guest’s will seem to pay whatever I charge in the restaurants (higher cost means less people go to it but there is no reaction from the guests.) 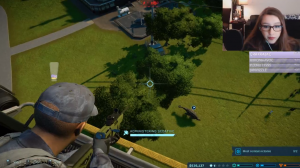 If you want to speed up gameplay you’re sore out of luck. There is one-time option and no ability to pause the game during the gameplay (only the save menu pauses the game).

The photography feature is one of my favorites—I love being able to make money for snapping photos of the dinosaurs. My complaint—again—is it offers little depth. The animations on the dinosaurs are beautifully done but are minimal in variation. They cycle through the same set of animations and it quickly becomes boring to watch them.

As I was driving around as a ranger I went into the Ceratosarus exhibit and one of the dinos grew angry at me. I spent awhile driving away from the dino before I realized there is no penalty for an angry dino coming up to the ranger. The rangers cannot be killed or injured.

Based off my first impression of the game I don’t recommend it—not for this price. If you plan to pick it up wait for a sale where it dips under 25usd. It’s worth around 15-25usd and the DLC .99usd .

If the game was still in development this would be a great foundation to a game. Unfortunately, this was a full release. I have a feeling the company is going to piece-meal the DLC and sell it in expensive expansion packs. The DLC offered (mind you it was released on the DAY OF RELEASE) is an additional 5 dinosaurs.  The dinosaurs AI is very simple so for additional money the dev’s have just dropped a few additional skins.